Golgotha, the Garden Tomb and the Long Journey Home

It’s been a few days since I’ve posted here, but our last day in Israel went from one last Biblical site to the airport to a three day visit with my parents to recover from a serious case of jet lag.  There is no way, though, that I would leave you out of our last adventure in Jerusalem.  Thursday morning’s trip was a visit to Golgotha and the Garden Tomb, the place where Jesus died, was buried, and rose again.

The Garden Tomb site, which began to gain prominence when archaeologists in the mid-1800s began to question the legitimacy of the site of the Church of the Holy Sepulchre, fits most all of the parameters of the Biblical account.  The Bible describes that Jesus was crucified outside the city of Jerusalem near a gate of the city along a major thoroughfare. The Garden Tomb site sits well outside Jerusalem’s wall at the time of Christ’s death and is very close to the Damascus Gate, which would have placed the site on or near the Biblical road to Damascus. Consider that the place was called Golgotha, or "place of the skull" in the scriptures, and the pictures certainly make the site all the more compelling. 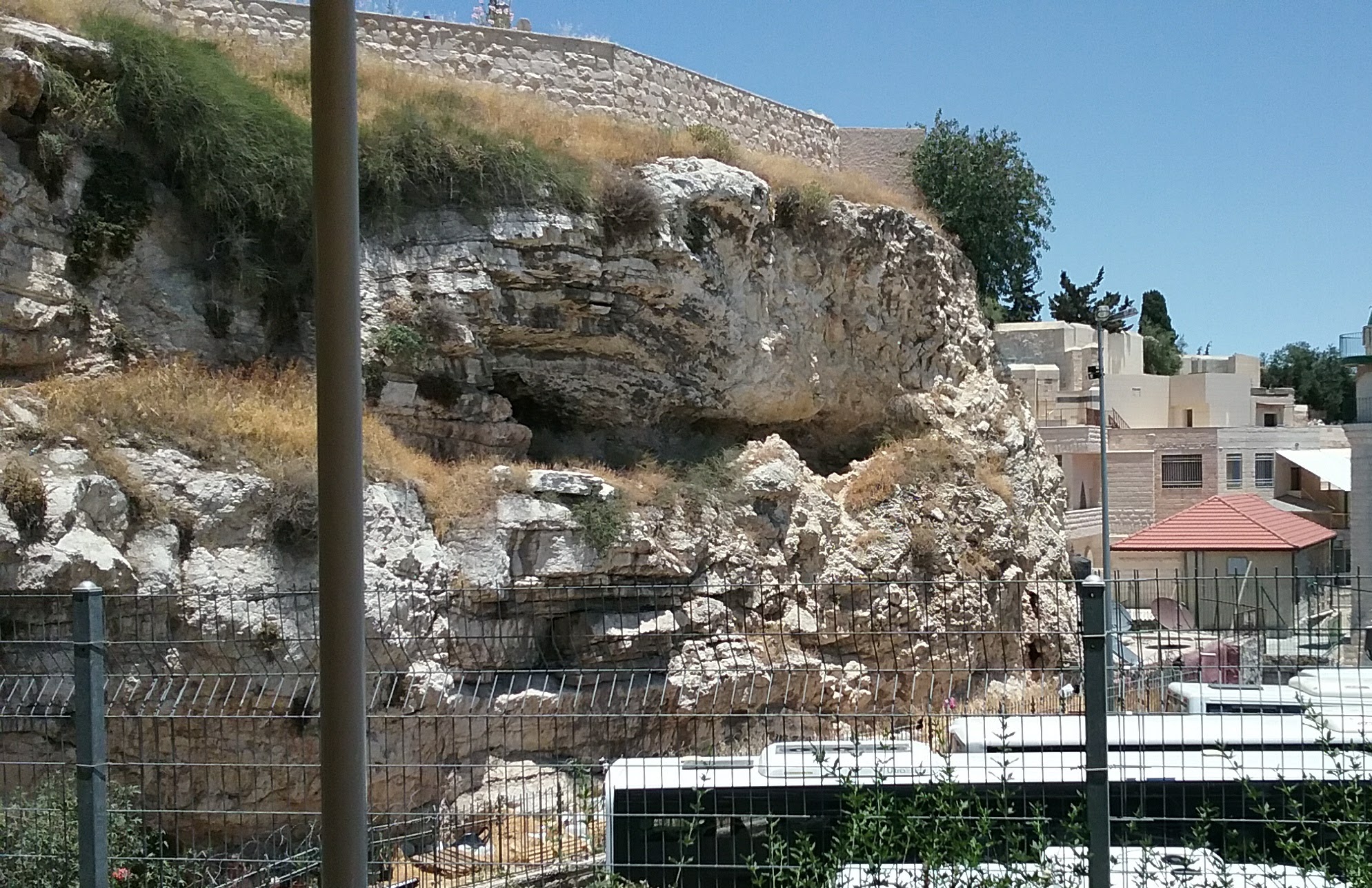 The face of a skull here is a little difficult to see as our guide told us the bridge of its nose was broken off in a snowstorm a few years back, and the mouth of the skull is also obscured.  But a photo of the site in the late 1800s is even more compelling. 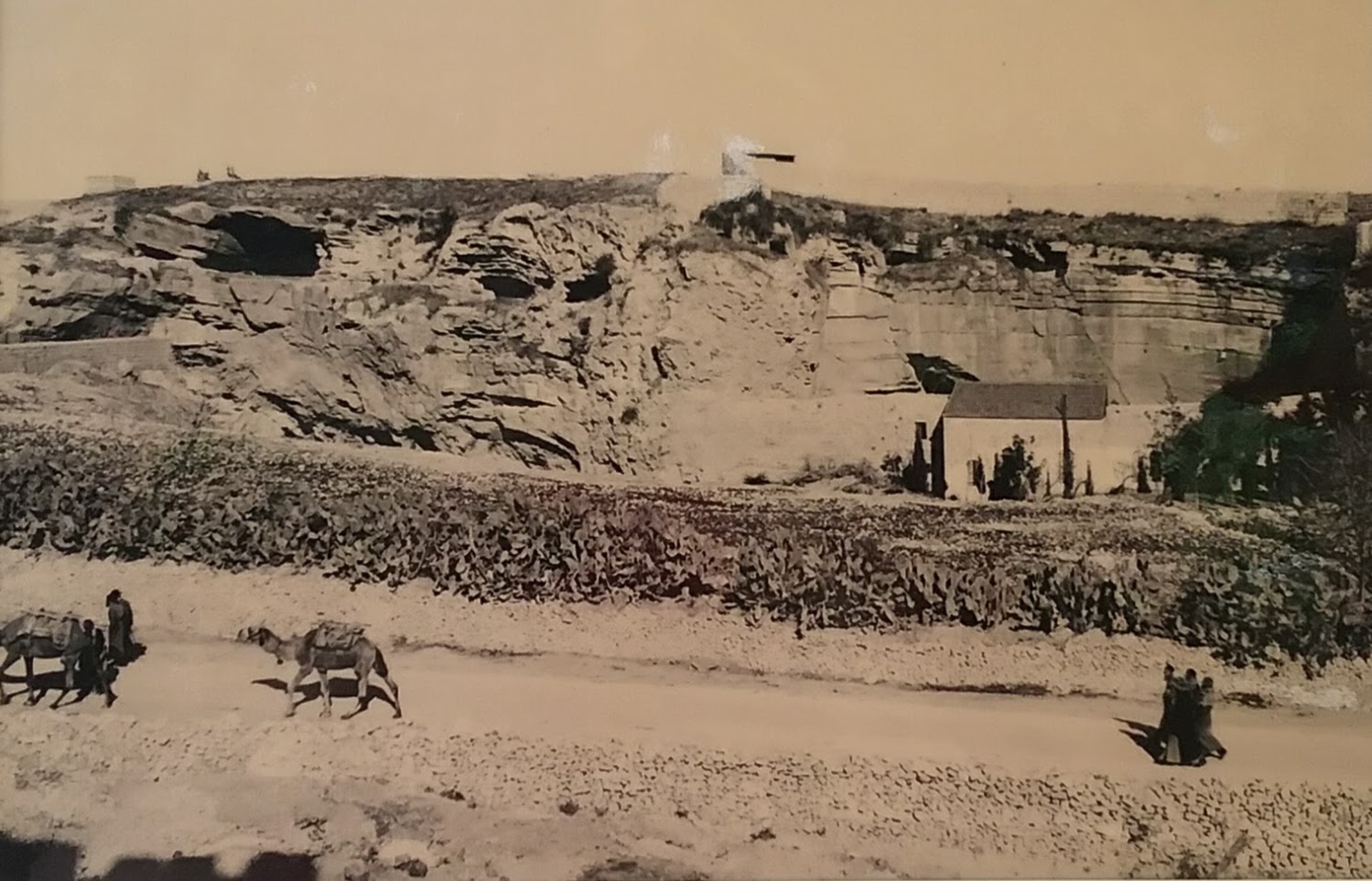 As I listened to this evidence, I questioned the Lord about the legitimacy of the site.  I can’t be 100 percent sure but I can tell you I know this much. As I sought the Lord about it, a single white dove flew down from the top of the hill and perched right by our group as we continued our discussion at the site. Was it a sign from the Lord?  In my heart, I had to say yes.

Our guide also shared with us an interesting tidbit that I found quite interesting.  We have all seen images – Hollywood inspired ones and others – that place the crosses of Jesus and the two criminals on the top of a hillside, framed by a gorgeous sunset.  Our guide said that was not the practice of crucifixion during Jesus’ day. Crucifixions would have taken place near people – beside a road or major thoroughfare – so that people could witness the suffering of those being crucified close up as a deterrent to commit crime.  Jesus was likely crucified at the base of this skull-shaped cliff, with the image of the skull formation in his direct line of sight. (That location is an adjacent bus depot today.)

The site of the tomb itself is also up for debate among archaeologists, but this site also offers compelling evidence that led to believe that this was the true site of Jesus’ burial and resurrection. The tomb itself was discovered in 1867, and in light of the evidence surrounding the Golgotha discovery, things begin to add up even more. John chapter 19 says that at the place where He was crucified there was a garden, and in the garden a tomb.  The discovery of a large water cistern and a winepress at the Garden Tomb site point to an active garden location in Jesus’ day – a garden in which one would have produced crops such as grapes for wine.  In Matthew 27, the tomb is described as being a tomb cut out of rock, belonging to a wealthy man by the name of Joseph of Arimathea.  Tombs in this day were often constructed with bricks or made from makeshift caves, but not this one.  This tomb is cleanly cut out of a single section of bedrock – hewn out of one stone. This tomb has a weeping chamber, as well as a burial chamber, and would have been sealed with a rolling stone.  It also has a low doorway through which the disciples would have been forced to stoop in order to look into and enter the tomb that morning. Remember in Luke 24 how Peter had to “bend over” to see the strips of linen where Jesus laid? All of a sudden the scriptures were coming alive. 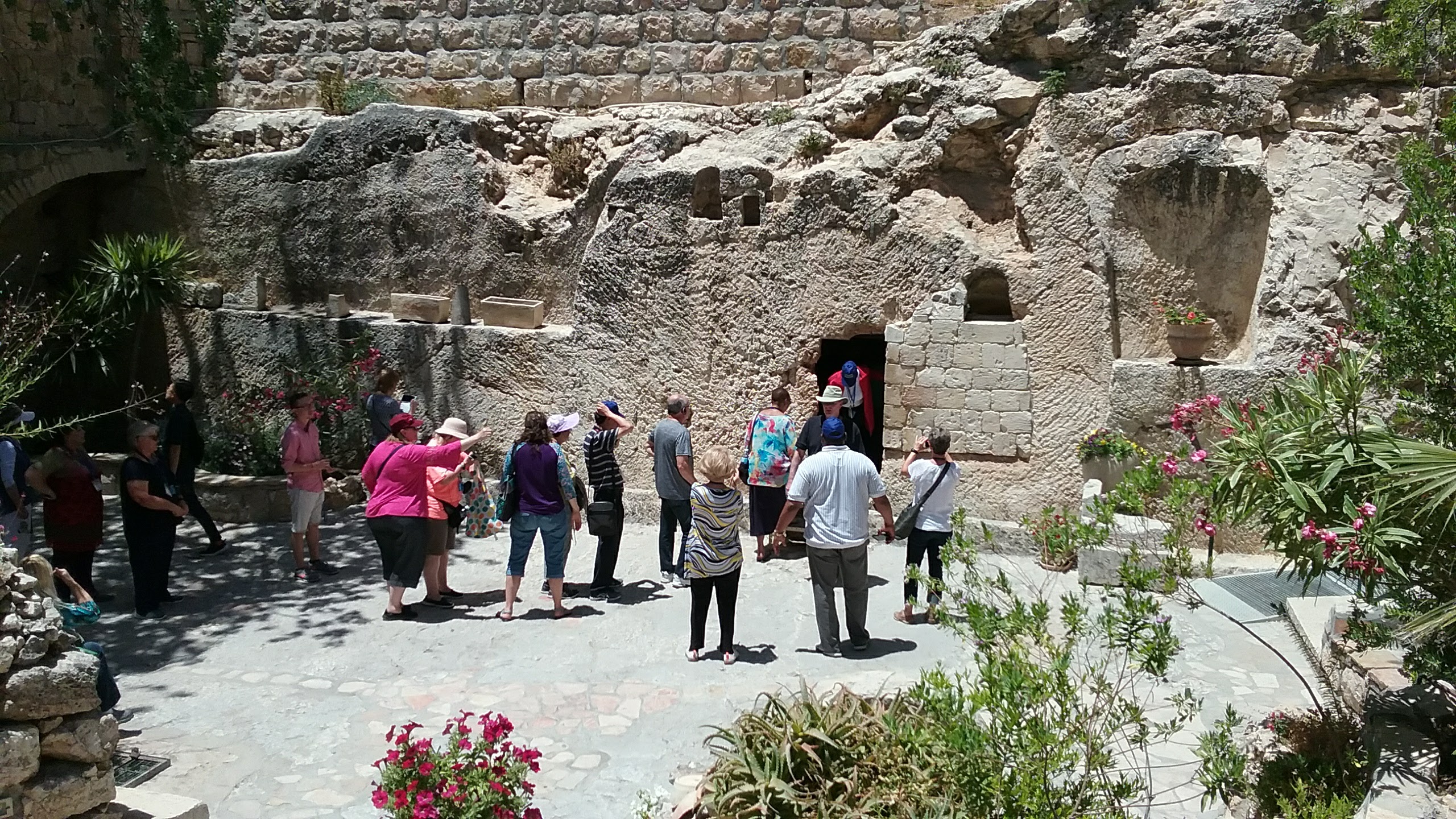 We had the opportunity to enter the tomb, each one of us, to not only take pictures, but reflect on the wondrous event of Jesus’ resurrection.  It was quite a moment for me to be there with friends both old and new, and to consider the gift of salvation and eternal life He secured for us there.

I was experiencing a mix of emotions during my whole time here – an overwhelming sense of awe and gratitude to God, but also a second set of emotions that was becoming more and more prevalent during my visit to the country. I have said before in this blog that political tensions between the Jewish and the Muslim populations were high, especially in Jerusalem, and encroachment into the Biblical sites by the Muslims was a common feature in this land.  Nowhere was this more prevalent than Golgotha and the Garden Tomb site.

I had visited several Biblical sites by this time, but was particularly taken aback to see the Garden Tomb surrounded by razor wire. 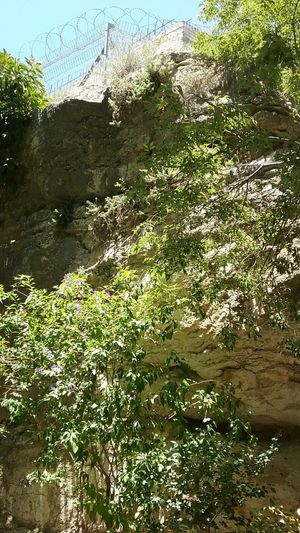 Also, a wider view of the Golgotha cliff shows a mosque directly to the right of the outcropping, and behind a fence at the top of the cliff lies a Muslim cemetery. The sign on the fence, which is written in Arabic, sadly declares Allah to be the one true god. 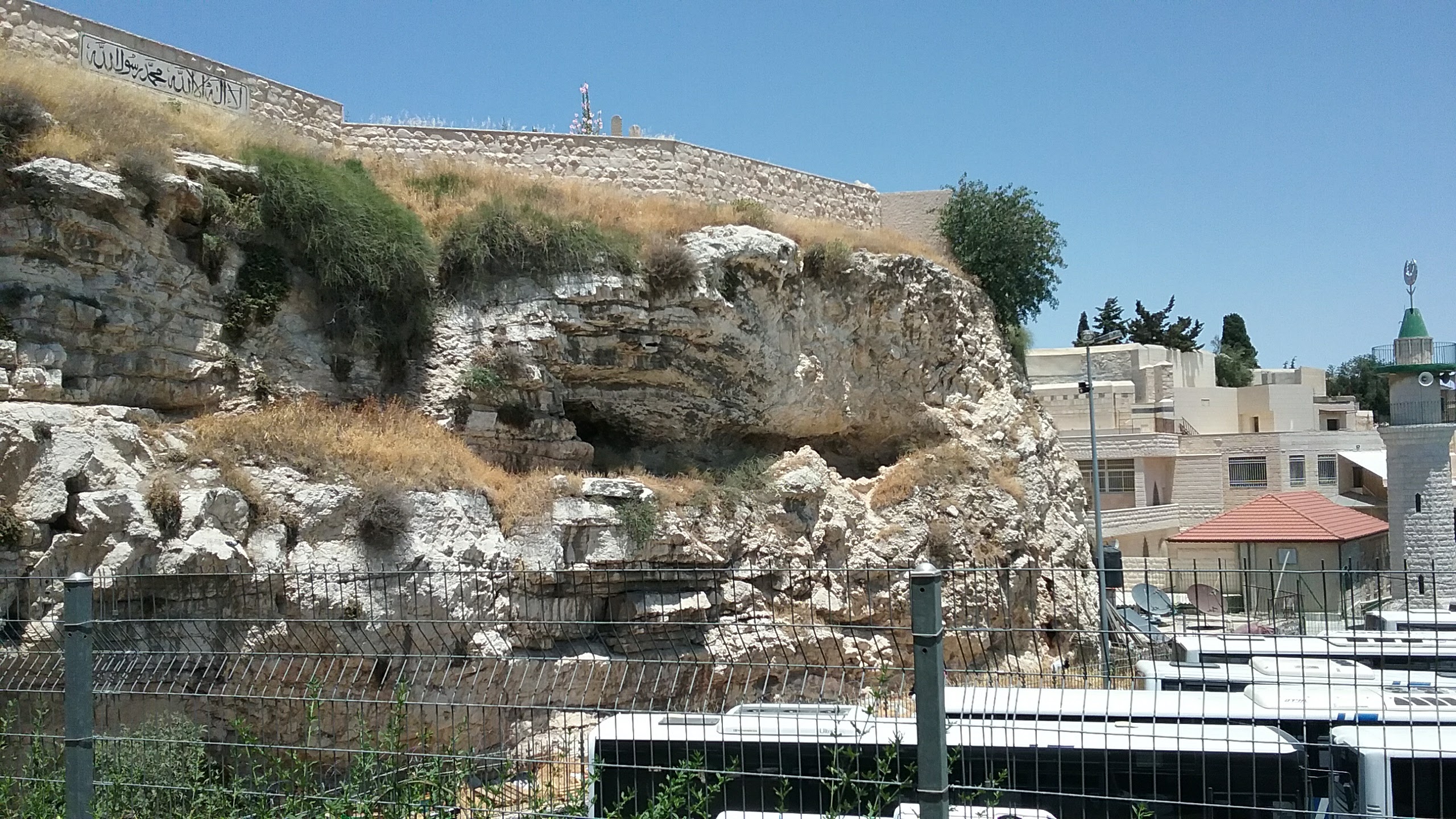 This disturbed me greatly, but Cesar, our guide, set me at ease so brilliantly by sharing the most eloquently delivered gospel message I have ever heard.  Cesar is a Christian, originally from Paraguay, who came to Israel on business – but upon coming to the country, Cesar felt a strong urging from the Lord to enter the ministry.  He learned of the job opening as a guide at the Garden Tomb site and is now fortunate and blessed to share the gospel message in the very place where it happened.  You could just feel the love he has for Jesus as he spoke, and his love for the people he gets to meet every day. I left the place encouraged by the fact that no matter what, the message of Jesus Christ is powerful and is delivering people out of darkness every day. The Lord is good!

After our visit to the Garden Tomb, it was back to our hotel to pack, grab a quick meal and hop on the bus for the airport in Tel Aviv.  Thanks for reading!

P.S.  I will be writing at least two more blog entries about my visit to Israel, and I am reserving one of those entries to answer your questions about my trip and what I saw there.  If you have a question you would like me to answer, send me an email at beth@bethcrosby.com and I will be happy to answer it as best I can.  Shalom! 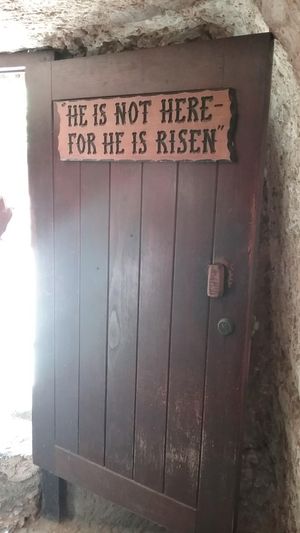