An Emotional Day: Hebron and the Holocaust

Tuesday's journey was both an interesting and an emotional one for us here in Israel. If I were to sum the day up in one word, it would be the word conflict.

Today's destinations were ones that were rife with the effects of political and religious conflict both present and past, as we visited the city of Hebron and Yad Vashem, the Holocaust museum in Jerusalem.

We began the day early by trading our regular tour buses for armored buses, a necessity when visiting sites in the Palestinian-controlled West Bank. Hebron is located deep in the southern portion of the West Bank, and our view of the drive certainly echoed the difference between Jewish and Palestinian neighborhoods.

We have been told during much of the trip that a number of distinct differences exist between the two sides, especially when it comes to their treatment of the land. Jewish neighborhoods, with their distinctive red tiled roofs, are clean and neatly kept, with every effort made to make the land beautiful. Palestinian neighborhoods, noted by homes with flat white roofs, typically lack the same care for property. Wherever there was a trash heap or an open air dump in Jerusalem, it was in a Palestinian neighborhood.

This was certainly the case when we entered Hebron. Hebron is a city with 215,000 residents, and over 214,000 are Palestinian. Only about 850 Jews live in the city, and the Palestinians severely restrict their movements within the city. Our guide for the day told us that the Jews are only free to live in and roam about 3% of the city. This photo is only of the southernmost portion of Hebron.  Only a few small neighborhoods less than the size of a city block are Jewish. 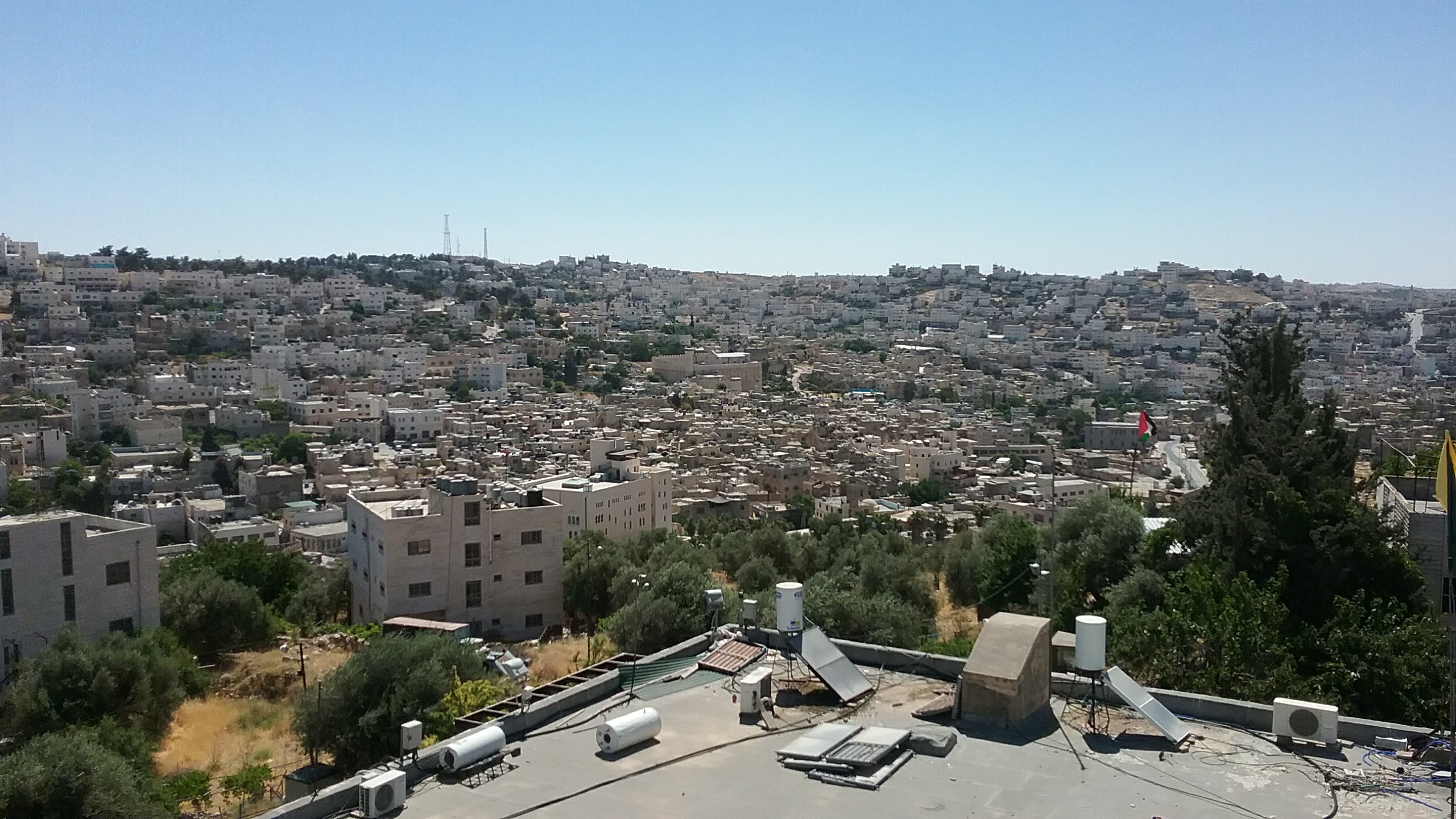 I was so saddened to hear that statistic, considering the deep roots of Jewish faith that are centered in Hebron.  Of utmost significance to the Jewish people is the fact that Hebron is the place where Abraham and his family are buried, in a place called the Cave of Machpelah, or the Cave of the Patriarchs. It's the massive building in this photo. 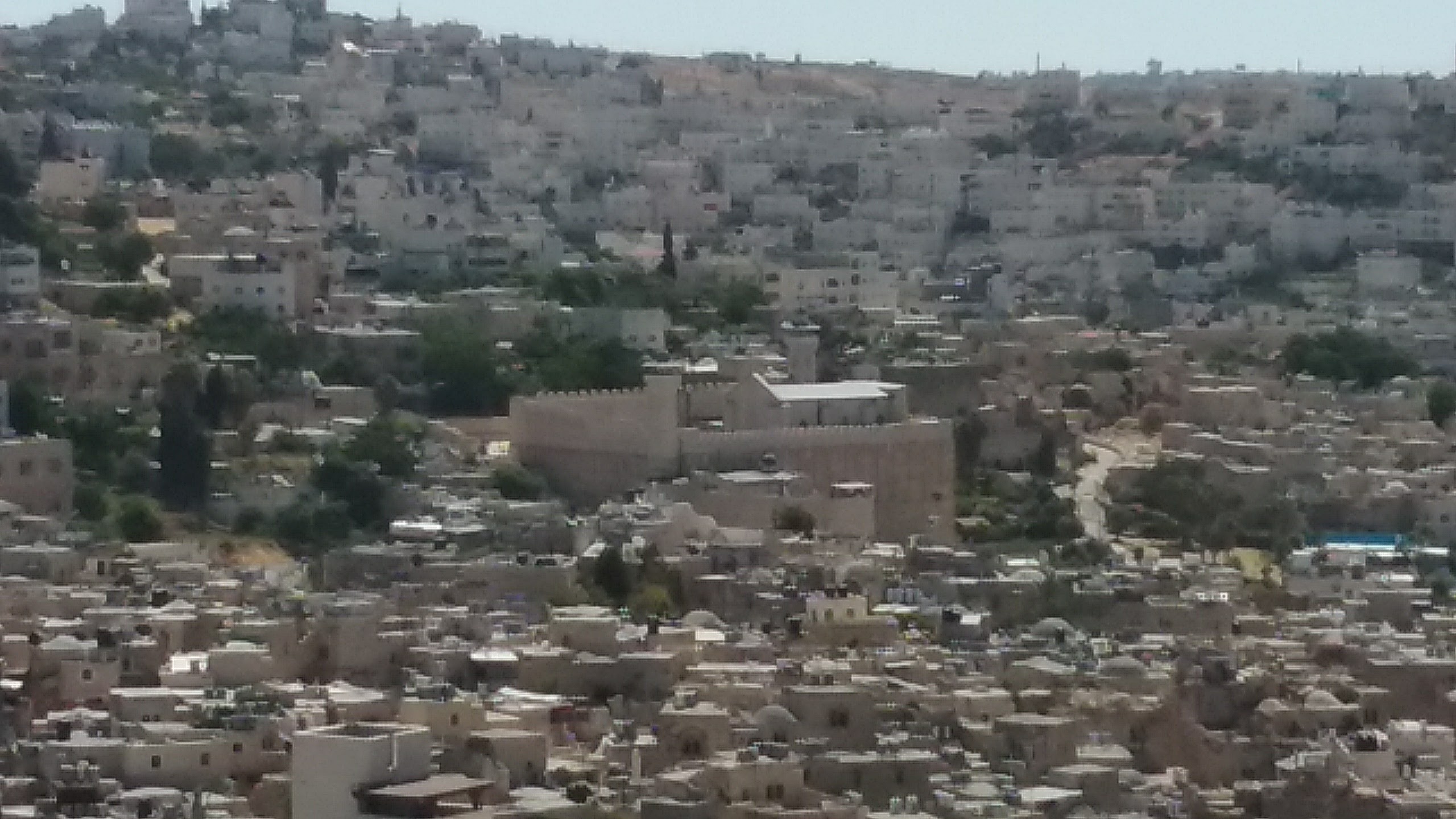 You read about this site in Genesis chapter 23, where Sarah dies and Abraham buys property from Ephron the Hittite for a proper burial site. It's the first recorded land purchase in the Word. Ephron wanted to gift the land to Abraham, but Abraham insisted on paying full price for the property. I don't know what that says about Abraham, but our guide alluded to the notion that this transaction eliminated all doubt of the legitimacy of the Jews to be in the land.

The story of the discovery of the Cave of Machpelah is interesting, but I will let you Google it for the time being. The cave has a massive structure built above it, and currently you can not enter or even view the cave itself. What is both interesting and saddening at the same time is that both the Jews and the Muslims consider the site to be holy, and both religions "share" the site - with a wall between them.

Both Jews and Muslims can worship at the site, but the ability of the Jews to worship there was obtained only after the Israeli army liberated Hebron during the Six Day War in 1967. In order for the Jews to gain access to the site from the Muslims, a compromise had to be reached. That compromise was to divide the building in half. Doors between the two sides remain locked - while I was in the site standing by a door, I could look through a crack in the door and see a young Muslim boy looking back at me. The space reminded me more of a library at first, with sectioned areas filled with books and copies of the Torah.  In the innermost room, there was a place for Jews to pray and worship - a section for men near the front, and women in the back.

Also of note in Hebron is the Tomb of Jesse and Ruth, which the Muslims also claim as an ancient mosque. That's a military post in the foreground. 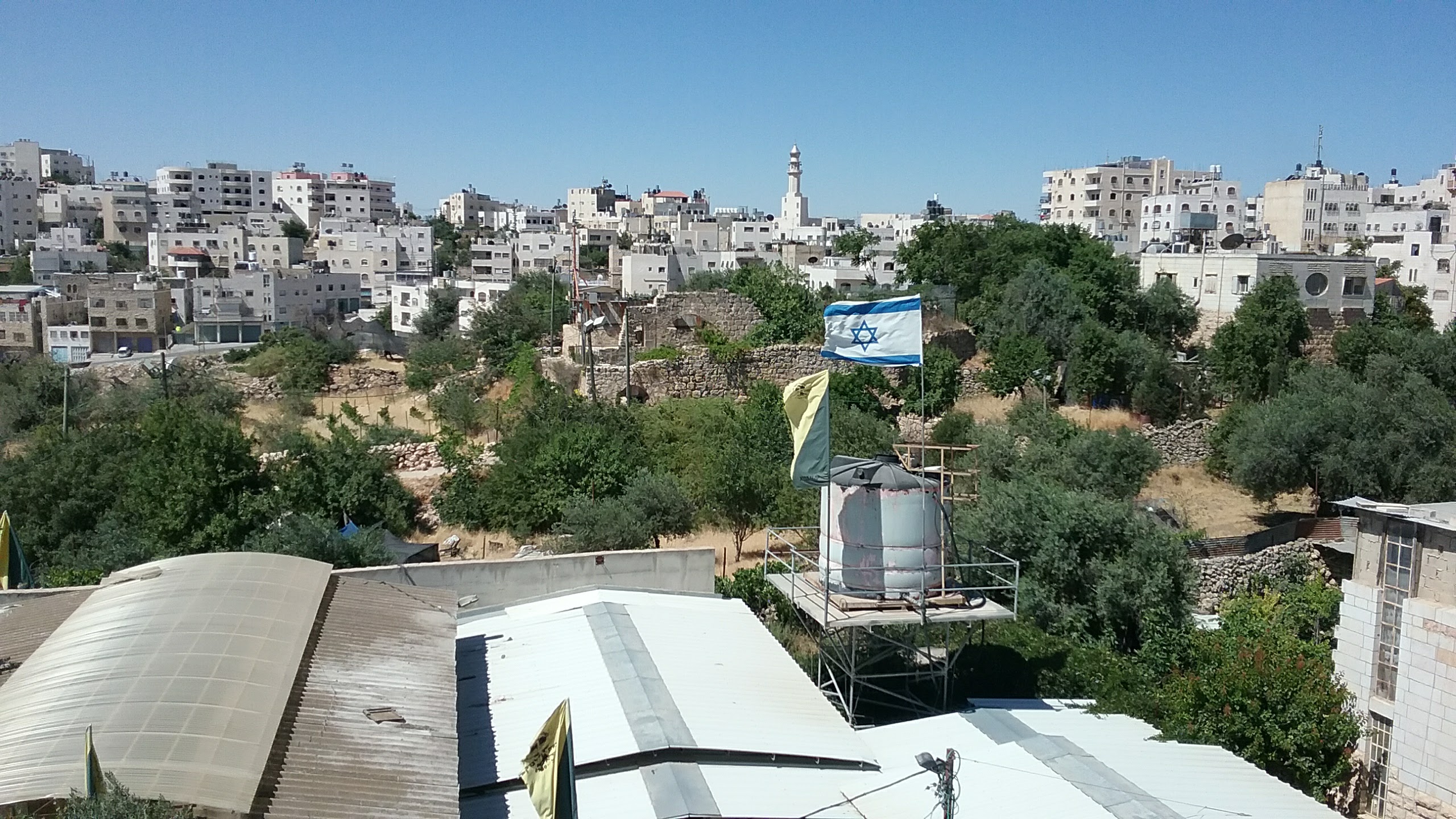 Our guide, much like our "Israeli Texas" friend from the Golan Heights, spoke so passionately about his desire for the Jewish people to reclaim the land that is rightly theirs. As we left Hebron, I could better understand their plight and their mission to fully re-occupy the land the Lord had promised them so long ago.

Our journey took us back to Jerusalem and to a site that I fully believe every visitor to Jerusalem should see. We visited Yad Vashem, the Holocaust Memorial in Jerusalem.

After a hectic lunch stop in the museum's cafeteria, where many of us were unfortunately schooled by the locals on kosher laws in public dining areas, we began the tour of this impressive facility. The design of the museum literally forces the visitor through the timeline of the Holocaust, zig-zagging through dozens of exhibits, images and videos from that horrible time in history. I thought I knew a lot about the Holocaust, but what I read in my school textbooks pales in comparison to what I learned here. "Never again, Lord," was my prayer the entire time.

Yad Vashem is also a place of remembrance for the victims of the Holocaust - for many, the only place where one can come and mourn. A room filled with names and records of many of the 6,000,000 Jews who perished resides here, with many shelves still empty as records are still trying to be located.

Of particular significance was the Hall of Remembrance. An imposing room, the Hall of Remembrance is a square room with an angular roof and a floor tiled with 6,000,000 small black tiles - one for each Holocaust victim. On the floor is engraved the names of each of the major concentration camps, and underneath are ashes recovered at each of the concentration camp sites. An eternal flame, which resembles a broken goblet, illuminates the hall. 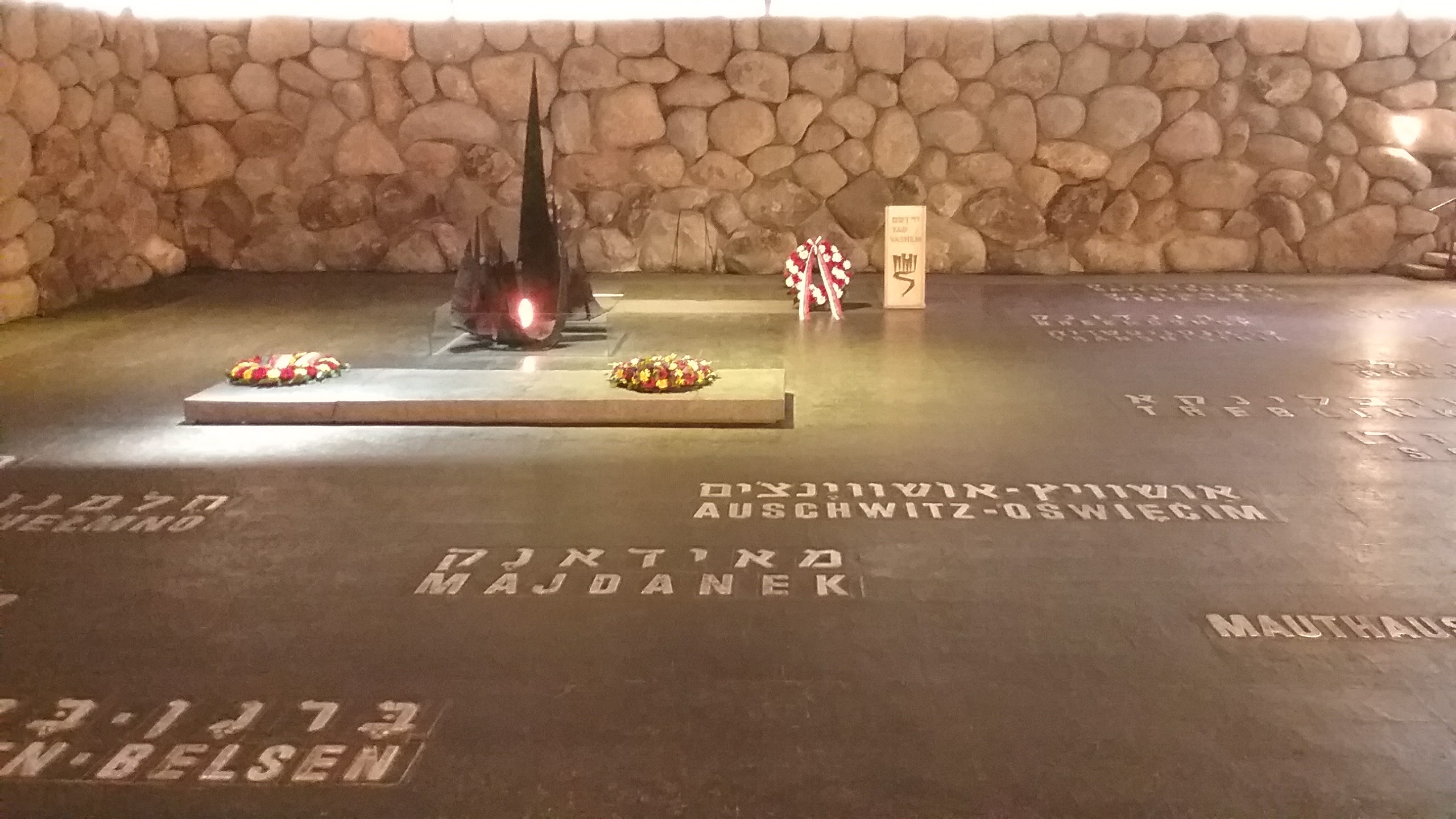 A memorial honoring the 1,500,000 children lost during the Holocaust also left many of us in tears.

Going through a place such as this is emotionally draining.  Experiencing both the frustration at the plight of the current day Jews in Hebron, and the horror and sheer madness that was the Holocaust in the 1930s and 1940s, left many of us emotional wrecks - myself included. I was deeply saddened and angry at the same time by how one group of people can treat another - and how we so many times fail at compassion and acceptance.

Tomorrow is a huge day for us here in Israel, as we spend the day deep in the heart of Jerusalem. We spend our day in the Jewish quarter exploring the Cardo, the excavation site of the City of David, and the Western Wall.  Shalom from Israel!