Jerusalem and a Surprise Visit to Bethlehem

I don't think I have had a more powerful day in my life spiritually than Monday, when we got our first real chance to explore Jerusalem.  And yet I know there is so much more to come....

Our group started our trek early in the morning because we had so much ground to cover.  Our first stop was the Mount of Olives and the Garden of Gethsemane.  But before we would get there, we had a long downhill walk to take - and it turned out that the very road we were on was part of the route Jesus took into Jerusalem during his triumphal entry.

Once we learned that, we were singing spontaneous hosannas the whole way down. It was a very steep downhill trek, so steep that if you leaned forward while you were walking you would start rolling downhill.  I jokingly wondered whether Jesus chose to ride the donkey because He wanted to spare his knees and ankles!

All kidding aside, the walk was truly inspiring and made all the more interesting when our guide pointed out that there were no palm trees along the road.  You might be thinking the same thing I did -  wasn't Jesus greeted with people waving palm branches when He entered Jerusalem?  Yes, but according to our guide, palm branches would have had to have been carried to Jerusalem from elsewhere, which made me believe that the rejoicing of the people as Jesus entered Jerusalem wasn't as spontaneous as we are so often led to believe.  The people would have had to carefully prepare for His triumphal entry, too, by gathering those palm branches.  Food for thought there....

Stepping into the Garden of Gethsemane was another very emotional experience. 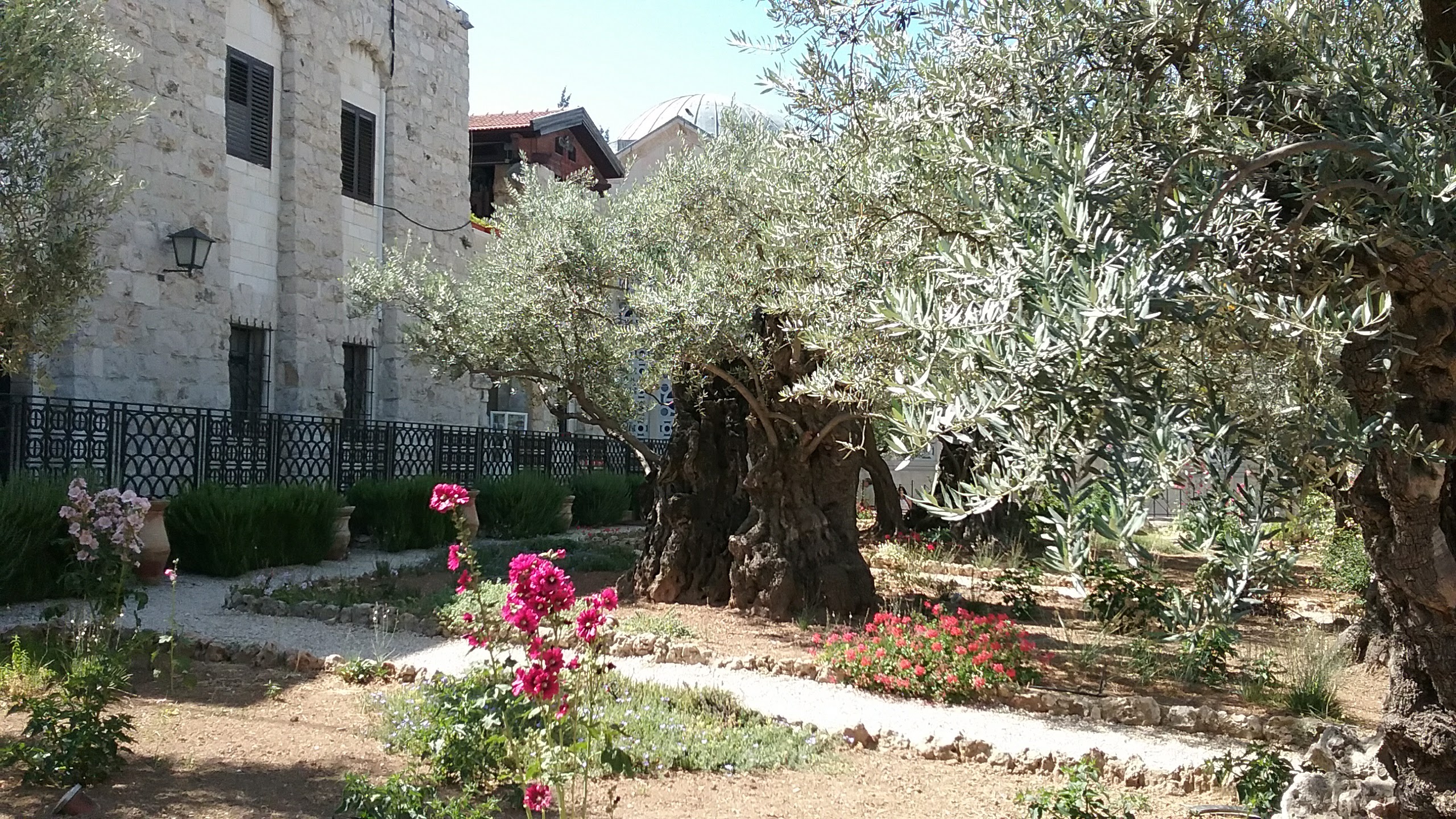 The garden is quite secluded - protected and gated by the Catholics that operate the site.  But once you're in the garden, you have a nearly perfect view of the Eastern Gate and a view of the Temple Mount. (It was obstructed for us because of some taller trees.)  We took a few moments to read the account of Jesus' prayer here in the garden, and of his arrest.  We also took a considerable amount of time to pray among these olive trees, many of which had been there for more than 2,000 years.  I kept thinking to myself, did Jesus touch this one?  Did He pray under this tree?  Which tree did the disciples fall asleep under? I couldn't shake the fact that I was walking where Jesus walked and praying where Jesus prayed. I also couldn't but consider the great suffering He was under at the time, about to bear the full brunt of our sin and shame on the cross.  I left there changed.

Our next stop was the Upper Room.

This was the spot where our group experienced the most anointed, most powerful time of worship during our entire trip. The Holy Spirit was certainly moving as we entered the room.

I heard it said that the Upper Room was not necessarily a room, but more of a rooftop - and that to me made some sense, considering that the architecture in the room was heavily Gothic in style.  The decorative arches do not speak of the time of Jesus, but the stone floor of the room was certainly of the Herodian period. But nevertheless, right where I was standing, was the place where the events of the Last Supper and of Pentecost took place.

Our group, along with others from many different nationalities who had entered the room, spontaneously began to sing and worship the Lord.  I recorded about a minute of that worship, and you can give it a listen at the bottom of this blog entry. It was absolutely angelic.

While our time was shorter in the Upper Room than we wanted, I left with a deep sense of God's presence and His pleasure in us for our offering of worship.

Bethlehem is in the West Bank and currently under Palestinian control, so we were not expecting to be granted access. Jews are not entirely welcome there, either. A concrete wall separates Bethlehem, and fences have been constructed along the road to Bethlehem to prevent the Muslim residents from throwing rocks and other more "sinister" items at suspected Jewish commuters.

Once we entered Bethlehem, we were welcomed at the most amazing gift shop - and it turned out that this gift shop was run by Christians!  We were immediately greeted by Pastor Stephen (I won't use his last name here for security reasons) who told us of the mission work his church is doing in the West Bank.  A tremendous ministry - and right then I knew I would be adding his church to my list of prayers.

We shopped like crazy here, since the proceeds from the store went to the ministry. Then it was on to a very special site in Bethlehem.  We went to a place called Shepherd's Field - the field outside of Bethlehem where the angel of the Lord appeared to the shepherds proclaiming the Savior's birth. 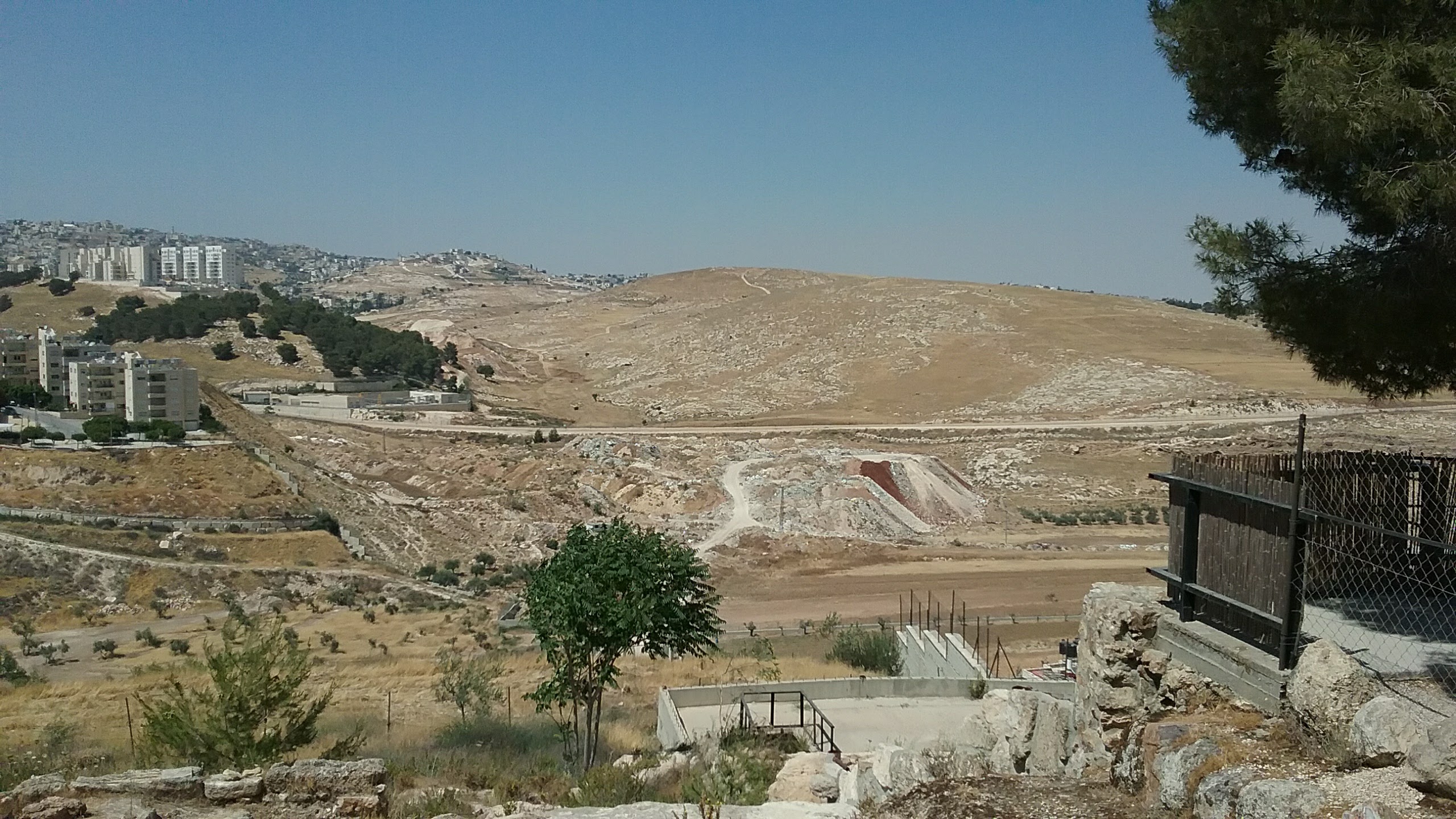 The field itself is not much - just a gently sloping hillside with rocks, grasses and a few caves.   But as we read through the account in Luke chapter two, I could picture how this field went from the dark of night to being as  bright as the noonday sun when the angel appeared.  I found it interesting that this field provided a perfect line of sight to Bethlehem itself. The village would have been in their view when that angel told them the good news.

Tuesday takes us outside of Jerusalem and into the West Bank again, as we visit the city of Hebron.  It is sure to be another incredible day in Israel!