The Jewish Quarter, the Western Wall and the City of David

I thought that I had experienced the most physically challenging day of our tour to Israel but Wednesday was truly the most grueling on my body. Temperatures in the mid-90s, along with miles of walking on every kind of terrain - including two sets of underground tunnels and caverns - nearly did me in. But the physical challenge was definitely worth it as this day was fascinating and inspiring.

We traveled to the Jewish quarter in Jerusalem's Old City, which is in very close proximity to the Temple Mount, and made our way through the Cardo. This portion of the community is situated on a very ancient road - a Roman road leading through the heart of Jerusalem. Over 1,500 years ago, this was Jerusalem's main thoroughfare, a place of commerce and community. 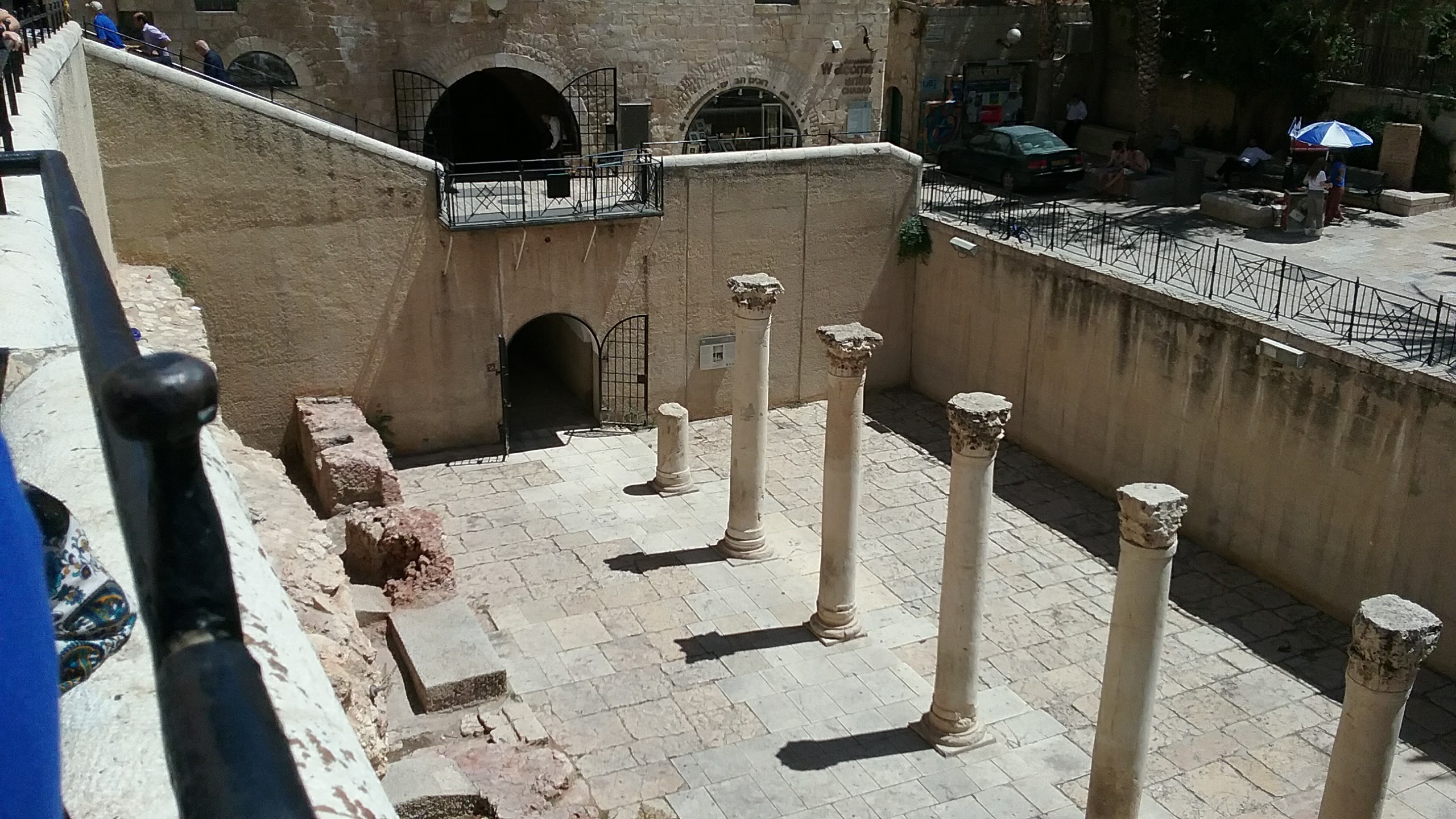 You can see a juxtaposition of different architectural styles here, which is common throughout Jerusalem because of the number of times the city has been conquered and occupied.  Here you can see a good example of Herodian flooring and Roman columns in the same structure. 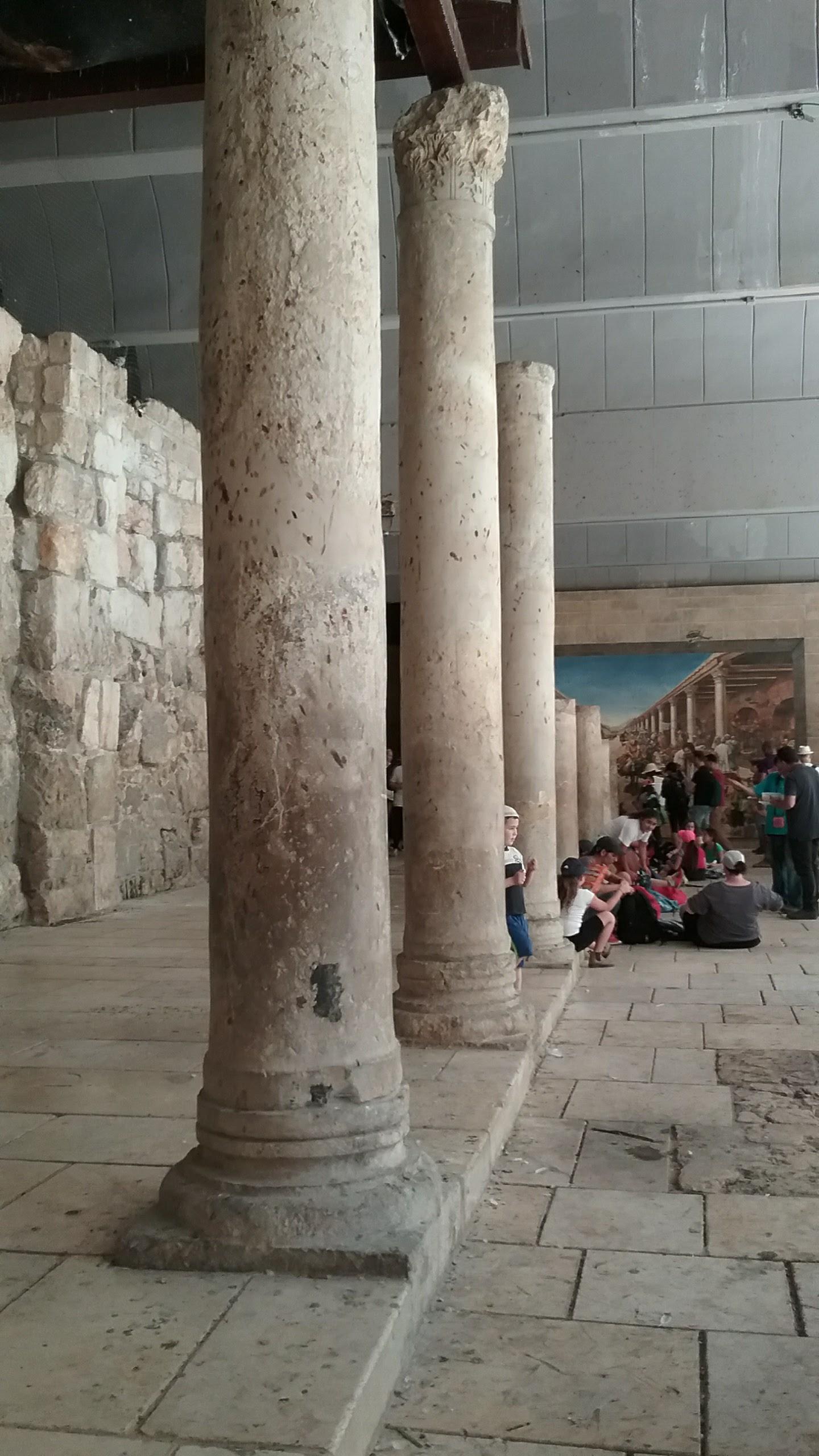 I had to laugh, too, when our guide pointed out the recently painted mural in this section of the Cardo.  Can you spot the little boy in the foreground with the baseball cap and backpack? 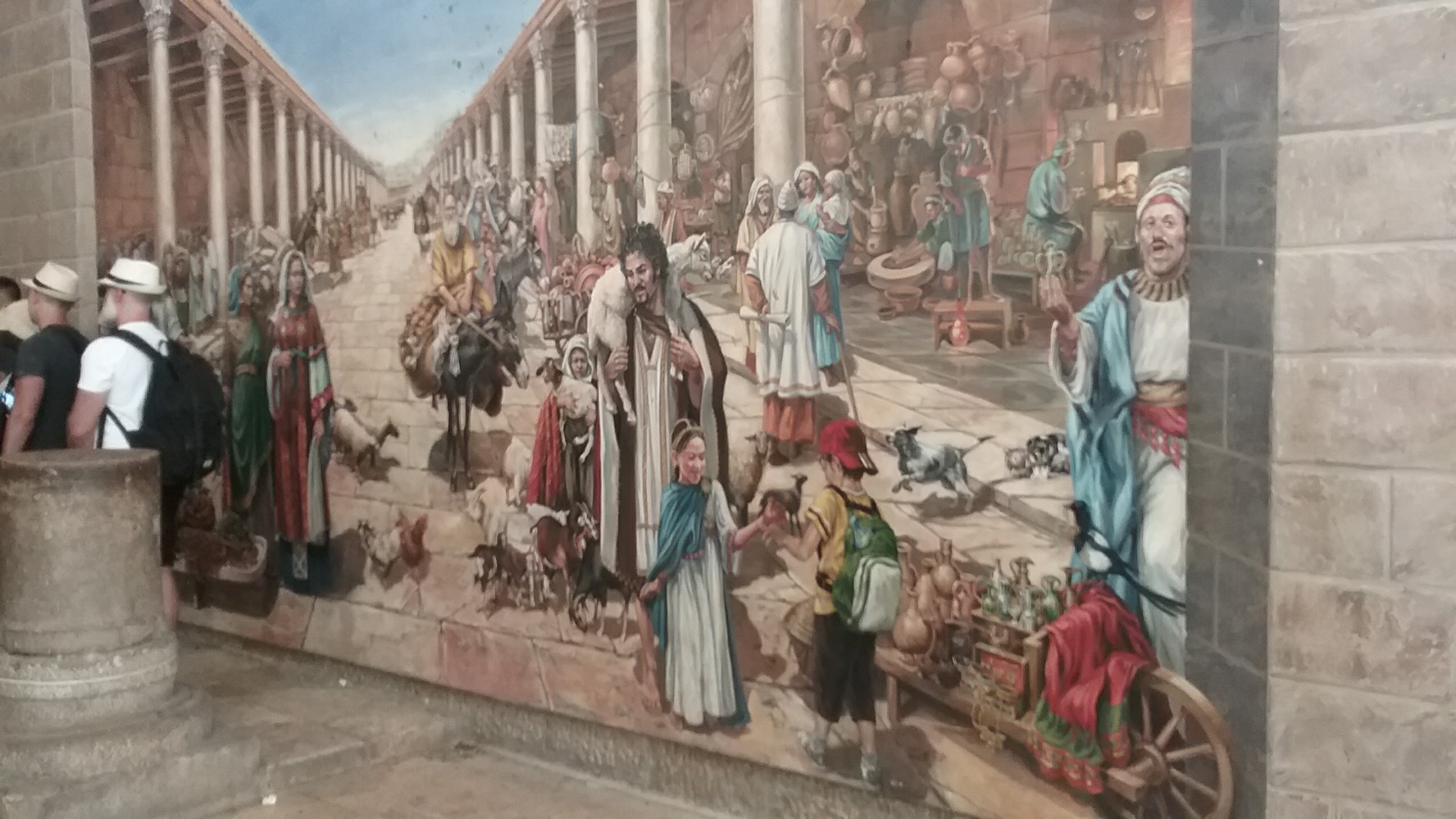 Once we were through the Cardo, it was a quick lunch of schwarmas and off to the Western Wall.  Here we had the option of taking an underground tour of excavations along about three-fourths of the western Temple Mount. There was no way I wasn't doing it.

It was challenging and fascinating to walk through these narrow passages and see how the Muslim community built their homes attached to the wall itself. Their community is built above the Roman arches that were once attached to the wall, too, so for a person who has an interest in architecture and archaeology like me, I was intrigued.

This photo is actually of one stone in the wall, from King Herod's time, and it's about 39 feet long. 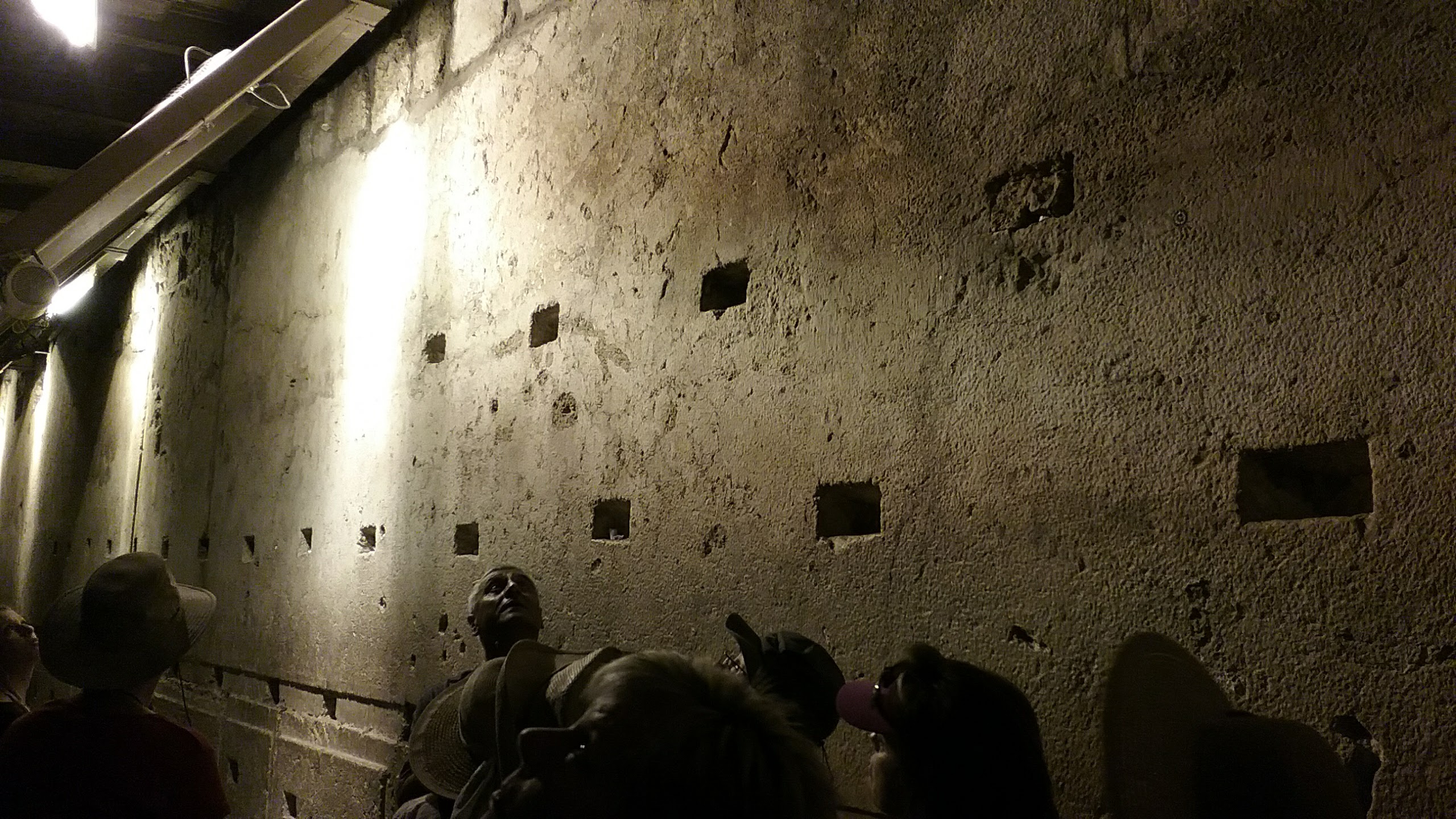 In these tunnels, there is one small section that is marked as the closest point to the actual location of the Holy of Holies. As we walked by, three Jewish women were intently praying at the marker - a common occurrence in these tunnels.

Soon, we were at the Western Wall plaza to have our opportunity to touch and pray at the wall. Members of my church sent along a number of handwritten prayers to place in the wall, which we placed in the cracks between the stones according to Jewish custom. It was powerful both to pray and to watch others from all around the world do the same. 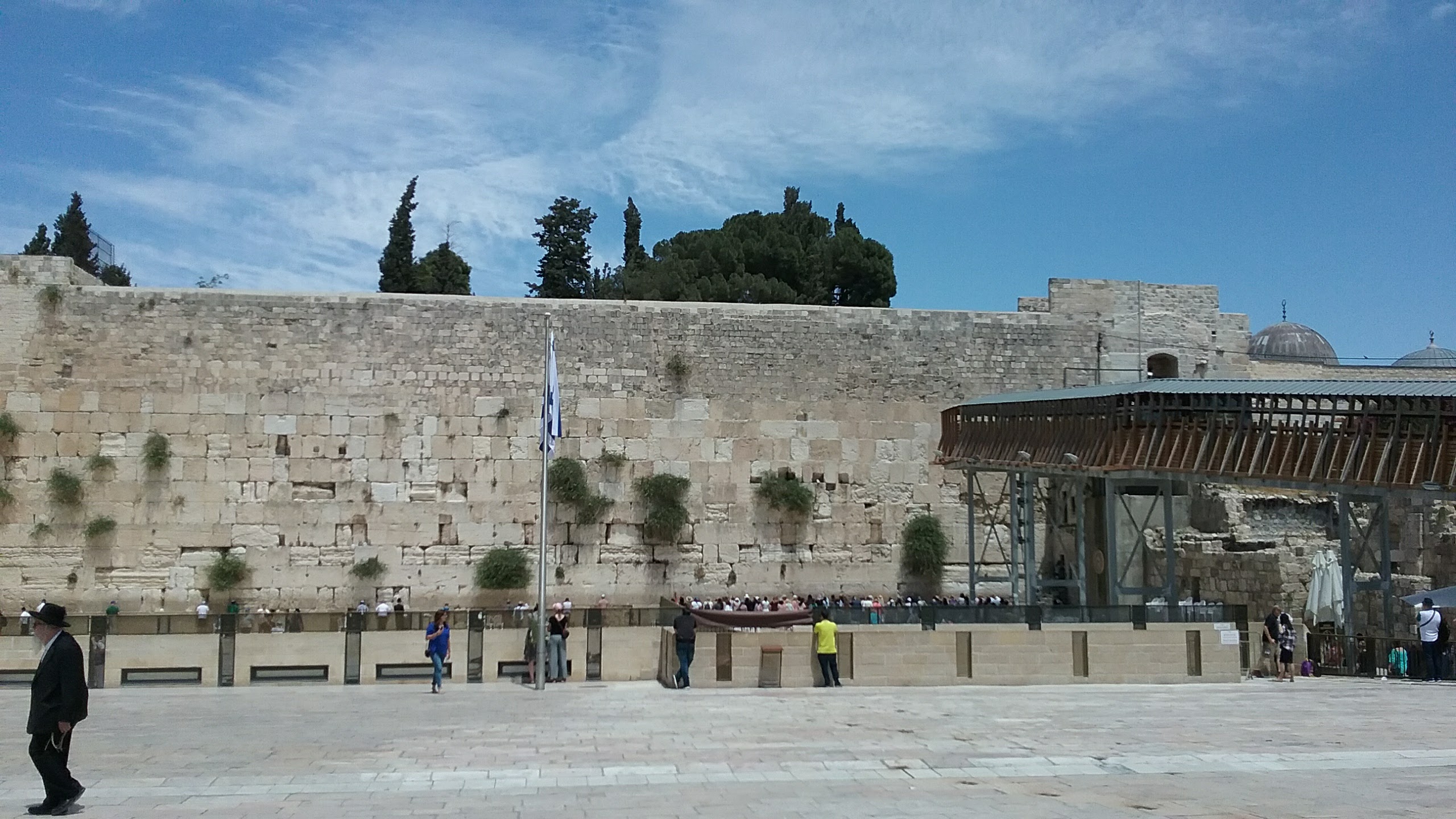 For those that wanted to really stretch themselves physically, the rest of the day was spent in the City of David. The City of David is a recently excavated site, and the site of David's defeat of the Jebusites in 2 Samuel 5 and 1 Chronicles 11. It is amazingly preserved, but a point of contention in the city. The site sits adjacent to a large Palestinian neighborhood, and the site is of course disputed by the Muslims. It was jarring to walk through the site at the same time the Muslim community was offering prayers.  The noise of their prayers was almost deafening.

This site also had an underground tunnel system to it, which explored an aqueduct system built in Hezekiah's time. This was a challenging walk, with VERY narrow passageways, but well worth the time and effort to see.

Our journey ended at the base of the City of David and the Pool of Siloam.  You would not have recognized the site from the street, as the pool is in a fenced in area in a Jewish residential area. Only a portion of the pool is excavated, for two reasons - one side is, again, residences; and the other side is the location of a Greek Orthodox church, who forbid the Jews from excavating underneath their foundation. 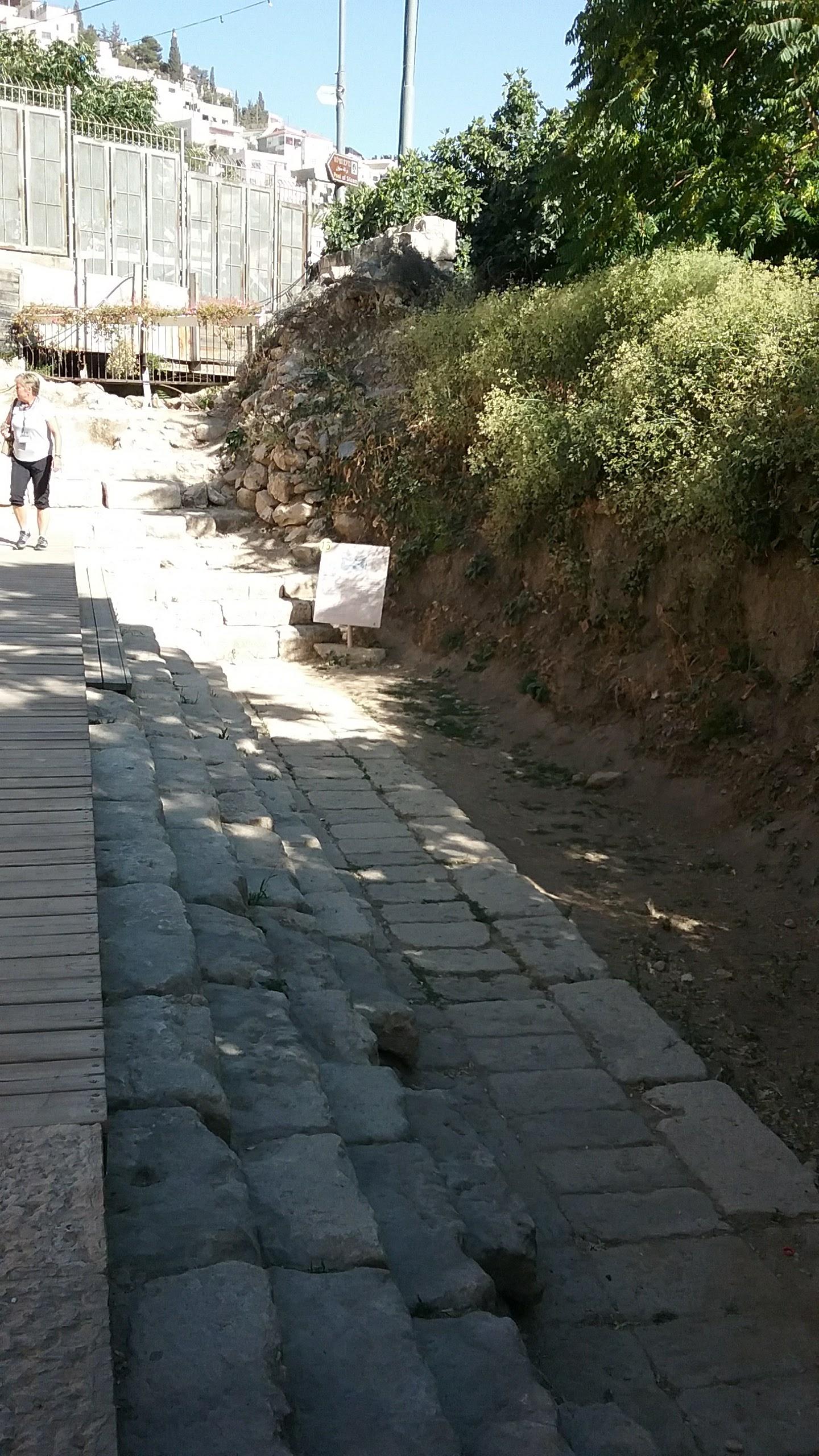 I had the opportunity to read the story from John chapter 9 of the man born blind who was healed here by Jesus. (I have been doing a lot of reading from the Word to the group, thanks to my radio voice.) I could just imagine Jesus and this man conversing in this very spot, and the joy of this man when he could see His Savior.  A powerful moment.

Thursday is a busy day for us as it is our last in Israel and we will have a rapid drive back to Tel Aviv to catch our flights, but we have one more trek on our journey.  In the morning we will be headed to the site of Jesus' crucifixion and the Garden Tomb, where we will have a communion service. One more big day in Israel!